Expectation can be a dangerous thing. The Porsche Carrera GT is, in concept at least, 20 years old now: Walter Rorhl first blasted it along rain-soaked streets the night before the Paris auto show; the reviews at its introduction raved about its powertrain and interactivity; an aura of danger surrounds it too, with that high-revving V10, traction but not stability control, and ceramic clutch.

20 years on, the Carrera GT still takes your breath away, the superiority of its specs still relevant in a double-clutched, turbocharged age. It is a true race car for the road, its body and engine based on the car that Porsche was going to contest the Le Mans 24-hour race in before they went and changed the regulations, thus making it illegal. Its engine, a 5.7-liter V10 produces 604 horsepower in North American spec, revving past a stratospheric 8000 rpm. All in a car that weighs less than a 996 Turbo. 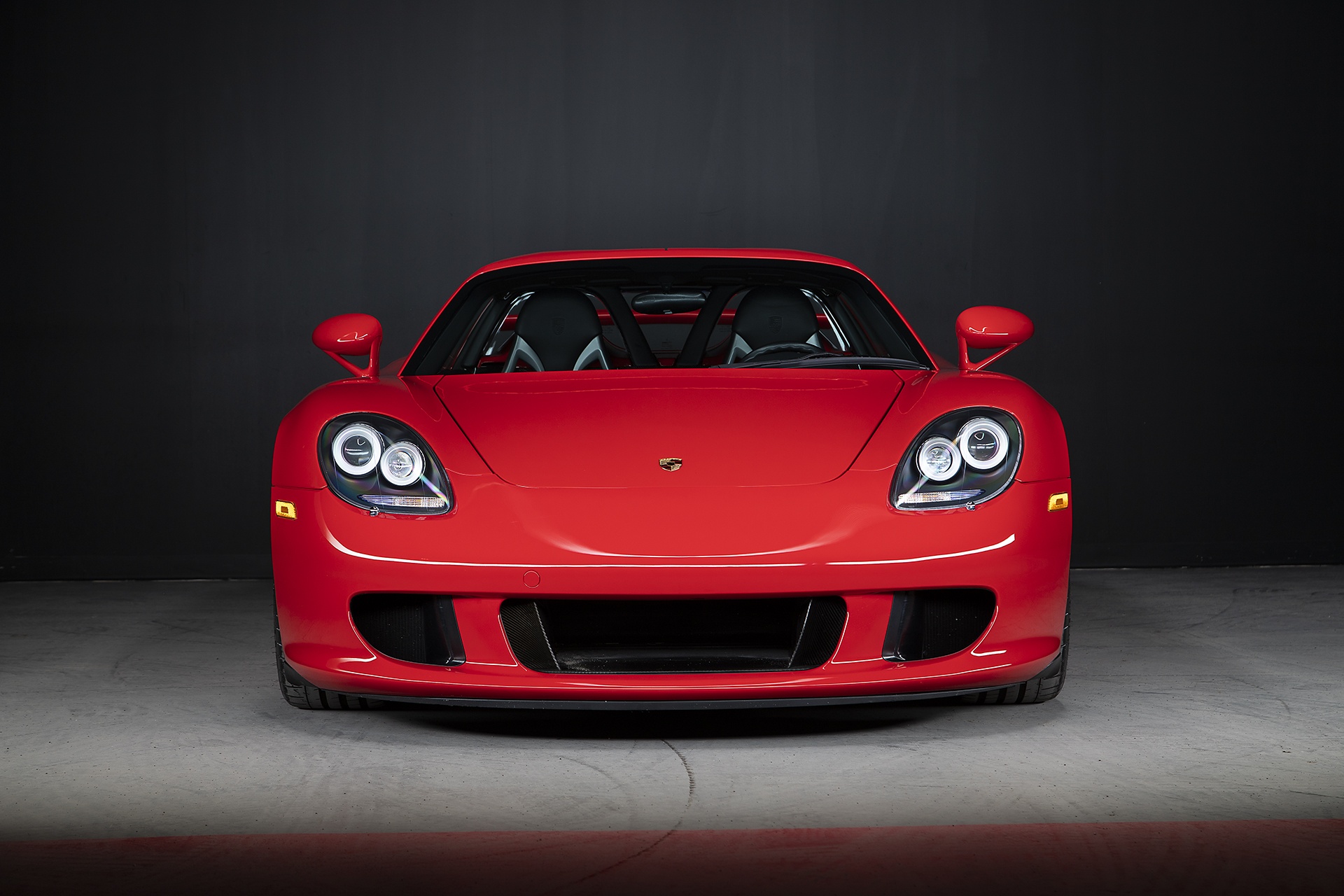 The GT has a pure race-car structure – cut and layered and baked and folded out of super-light carbon-fiber. What you might not expect is that its engine sits in a similarly-constructed cradle, the first of its kind installed in a road car. The cradle and the engine sit incredibly close to the ground thanks to a ceramic-composite clutch that’s orders of magnitude smaller than any normal clutch, thanks to its unique construction. The silicon-carbide brakes are light enough to heft in one hand. Even the cabin’s centre console is constructed of magnesium to save weight. All the ingredients are still here for a car that, for even serious and well-heeled enthusiasts, will rewrite your expectations not of speed, but of response and purity.

With the traction control struggling to control the wheelspin – that clutch takes a bit of getting used to, working better when you let it out with no throttle to get rolling – the GT blasts to 100 km/h in less than four seconds – a number that, these days, is fast but not overwhelmingly so. But what’s most impressive is how the speed just keeps on coming. On the back straight at Mosport, for example, even really powerful cars reach a point where the rush starts to tail off just a bit, where you can sense the engine beginning to lose its battle with wind resistance and friction.

Not in the GT. It seems to accelerate as quickly between 100 km/h and 200 km/h as it does from 0 to 100, and if your courage and the road don’t run out, it would likely go from 200 to 300 equally quickly (top speed is 320 km/h). All this fury is accompanied by a sound like no other car I’ve ever driven, a piercing, throbbing buzz-saw dentist’s-drill wail that sounds like the entire grid of a Formula 1 race is coming up behind you.

As if the speed – or when you’re on the road, trying to keep the speed in check – isn’t enough, the rest of the GT verges on sensory overload as well. The whole car buzzes with some weird life-force. (Or, maybe, it’s just you, quaking in your shoes at the thought of how much that speeding ticket is going to cost.) The steering rack constantly feeds your fingers messages about what’s going on at ground level. The birch-wood-topped shifter – no fancy paddles in this car – quivers with anticipation when your hand makes the tiny reach over from the wheel to grab the next gear. The brakes have immediate bite with even the lightest brush of the pedal, but they’re so sensitive that you can flex your little toe to modulate them precisely. Even the seats – one-piece leather buckets with huge bolsters and carbon-fibre frames – play an integral role, telling your backside exactly what the rear tires are up to.

With all this, do you really need a high-end stereo with Bose speakers? No wonder its controls are so tiny, and so far away at the top of the dash.

Thanks to its wind-sculpted body, active aerodynamics (the rear wing is “retractable” at 130 km/h, not “deployable”, which says something about the speeds this car is intended to be driven at), and updated with superior modern 19-inch Michelins, the Carrera GT actually gets better the faster you go, as the underbody venturi ducts suck it to the ground, improving the already-impressive cornering grip. Unless you’re some kind of driving god, you’ll brake, you’ll turn, you’ll speed up all over again; you may have approach your own limits, but it’s not likely you’ll truly approach the car’s.

What’s different about the GT is that, unlike modern mega-cars, or even its contemporaries like the Mercedes SLR McLaren or Ferrari Enzo, there is no stability-control system, and the engine’s savage power delivery and the immediacy with which it responds to even the smallest inputs make it a serious and addictive challenge. Conversely, the rewards of driving it properly are that much greater. It’s a car that requires serious commitment from its owner – to make the mental leap over its big asking price, and then to step up every time one slips behind the wheel. 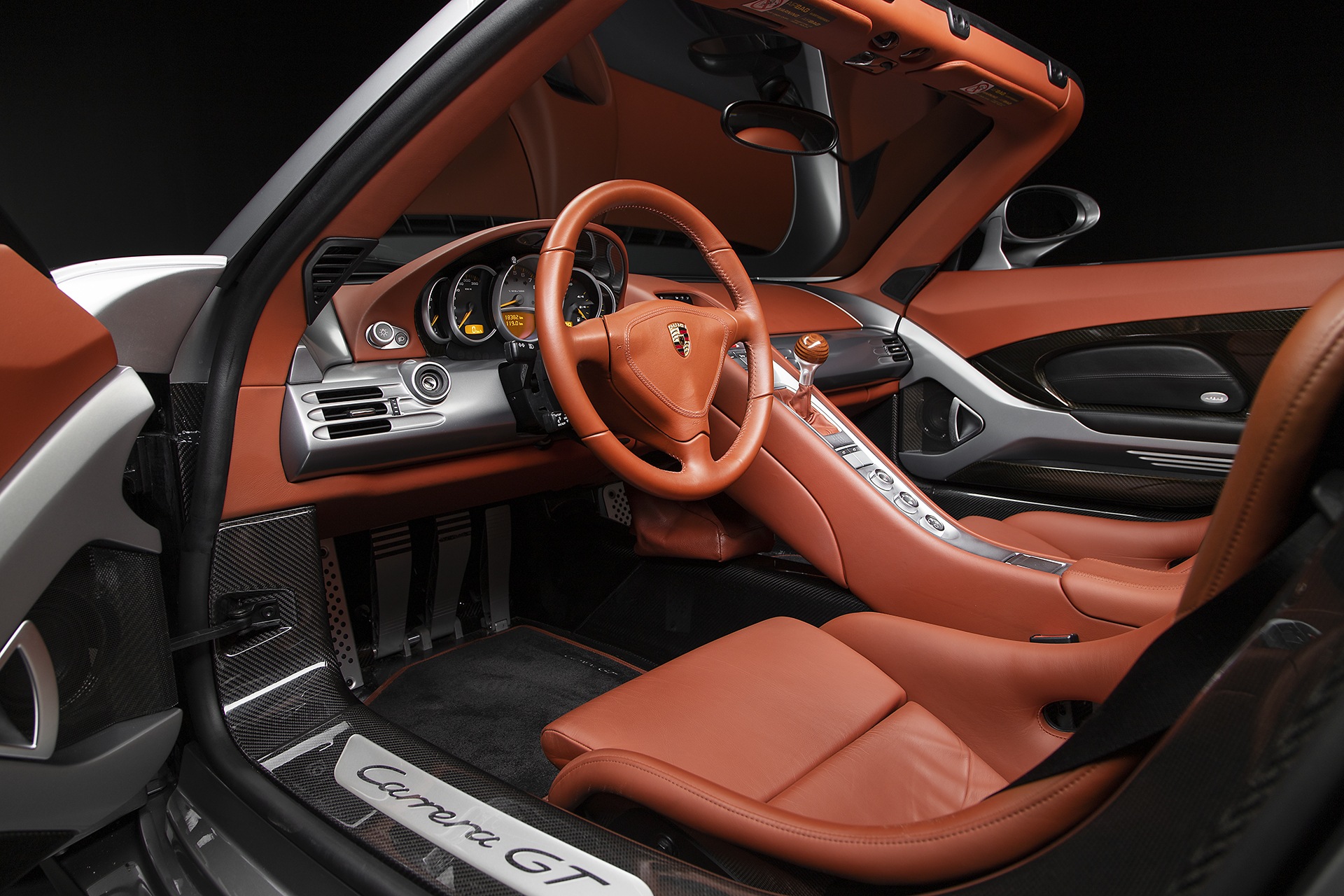 The other thing that sets the GT apart from the rest of the supercar crowd is that it’s been subjected to the same abusive testing as the company’s other, more “pedestrian” sports cars. It’s a “real car,” exotic as can be, but also something that you could drive and enjoy regularly. Other than the on-off clutch and the super-low ride height – no axle lift was available in 2005 – the GT is still a Porsche. You sit comfortably upright, facing a row of legible gauges; the mirrors are huge and driver-friendly; even visibility out the back over the mesh engine cover is pretty good, and spectacular for a supercar, especially when you take out the roof panels (did I mention that it’s a convertible? It’s a 320-km/h convertible!).

20 years on from the introduction of the concept car and 15 years on from the time I first slipped behind the wheel at Mosport ­– the Carrera GT ranks as easily one of the most beautiful, most exhilarating, and most engaging cars I’ve ever driven. It still looks the business, right down to its LED lighting, and there’s a delicacy and a lack of inertia about all of its controls that set it apart from the heavier, more tech-heavy, more secure supercars of today.

The Carrera GT is a car that combines modernity – carbon structure, pushrod suspension, race-car engine, and Porsche solidity – with an analog quality, a lightness of touch, and a deftness of feel that are more reminiscent of the best vintage cars. And that’s why I think it’s the ultimate modern collectible, and a car that, given its driving experience, its relative rarity, and the quality of its engineering, is still undervalued, even at today’s elevated prices.

In a long career in automotive, and specifically car sales, there has always been one thing that’s stood out with cars of the Carrera GT’s level: how can you sell something if you can’t fix it as well?

Many dealers and auction houses can always claim to be professionals on a certain car or a segment within the business, but how legitimate can that claim really be when the extent of their abilities ends after the car is detailed sold and delivered?

From the start, the Porsche Carrera GT is truly a car that’s one of our specialties.

Although Pfaff Reserve has only existed for four years, our expertise in the workshop goes back to 2004 when the very first deliveries occurred from Pfaff Porsche, which previously occupied our location at 101 Auto Park Circle.

We have lived through, and understand deeply, their relatively small issues, and we also are fully conversant with the GT’s charismatic personality and driving experience. Two of our technicians worked on the Carrera GT when it was new, and they are in the process of training our newer technicians; two of our sales specialists have a deep understanding of the GT and have dealt with enough of them – from worldwide sales to maintenance, storage, transportation and more – to know what’s a good one, and how best to take care of the ultimate modern collectible.

This particular Guards Red example is actually the third Carrera GT we have offered in 2020 alone. The level of specialist reconditioning it has gone through, and the expertise that we’ve built over the years maintaining them, makes Pfaff Reserve the absolute GT specialist in Canada.